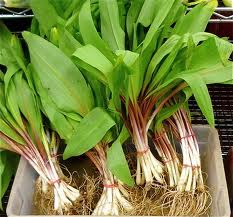 In the city where I live, the popular edible native plants are going extinct.  Why should you care?  If you can get them at the farmer’s market, what does it matter, if the ecosystem in the park is getting disrupted?

In Quebec, the use of ramps in restaurants is now heavily restricted. Native forests have been so damaged by inexperienced harvesting that the wild leeks may not rebound.  We are seeing that now in the Kitchener area, along the banks of the Grand River.

In North America, we have an ugly history of taking what we want, when we want it.  Native women.  Land.  Passenger Pigeons.  Buffalo. It’s like we have no switch inside that says, “I have enough”.

Early on in the European invasion of North America, it was discovered that the wild-growing American Ginseng had medicinal properties coveted in Asia.  A ginseng gold-rush ensued, everyone rushing to get ‘their share’ before it was all gone.  And it virtually is.  Most field naturalists won’t point it out when they see it in the woods, because it’s so rare that it’s struggling to survive.

We are now destroying the fiddleheads and leeks/ramps in the natural areas along the Grand River.  People who have no understanding of how to protect the plants for future generations, or even future harvests, think they have a hobby of wild food gathering.  Rather, they have a brief interlude of unintentional pillage and destruction, which will not be able to be repeated because the plants’ needs, and the ecosystems’ needs, have been ignored.

Fiddlehead ferns require that most of the uncurled ferns are left intact on the root.  Break off more than one in ten, and you have left that plant less able to feed itself from the sun, vulnerable to illness.  Break off all of the fiddleheads from a single root, and if that root is really lucky, it might have stored enough energy to send out a smaller crop of weaker curls.  Many just die.

No fiddleheads will come again from most of the plants along some of my favourite stretches of the trails along the Grand.  But an even greater tragedy is the leeks.  Leeks have a way of growing that leaves them very vulnerable to disturbance.  Top estimates of how many may be taken from a patch without damaging it run at 5%.  That means one out of twenty plants may be harvested by one person… and not by every other passersby. 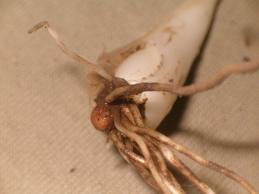 Ramps store most of their energy in the bulb of the onion, the part that is most succulently edible.  A plant that is uprooted cannot grow seeds; its genetic diversity is gone from the population, and its life is forfeit.

But take a look at the roots.  Notice how they go out to the sides, and then think about how closely leeks tend to grow together.  Harvesting a single leek doesn’t just harm that leek.  At best, its neighbours’ roots are disturbed, and less able to support themselves both foodwise, and stability-wise, in the soil.  At worst, they are weakened to the point of not surviving.

Soil disturbance also encourages invasive plants to take hold, and earthworms (a non-native species that is heavily destructive to native forest floors) can move in. That patch of soil may be so changed by uprooting or digging a single leek that the leek’s former neighbours die, and that soil will never be able to support another leek again.

We are doing ourselves, and our future, a disservice by not learning about responsible harvesting in grade school.  As a result,  the worst grade school behaviours (I’ll just take what I want) come from people of all ages when they walk the trails.  If local democratic process weren’t happening in toxic buildings filled with people wearing toxic neuro-disruptors and hormone disruptors disguised as ‘fragrance’ in their laundry and personal care products, I would brave the over-stimulating crowds and try to get more involved.

If I had my druthers, we would develop a local wild harvesting manifesto which required that any harvester of native species be able to name all of the interdependent plants and wildlife, and the impact of harvesting, for every ‘desirable’ species.  Every patch of woods and other natural area would have a team of youngsters designated to patrol, harvest, and monitor it (learning nutritional, culinary, and business skills in the process).  Fines and ecological restoration work would be required of anyone showing the fruits of illicit harvesting.

The final caveat to this plan, though, is that it will go nowhere unless people who are going hungry are given adequate, real food, the skills and land to grow it, or the livelihood to purchase what they need.  Our food banks are chock-a-block with processed foods that anyone who is already stressed and vulnerable will take much more harm from eating than the average person.  Wild foods are incredibly nutrient-dense, compared to our dumbed-down agricultural foods.  How can we take care of them, and ourselves, better?