Why do autistics drone and bang their heads?

The Story of Mike and Jackie

Mike was born on August 18th, 1958.  He was one of my dearest friends from July 1988 until his death on May 15, 2013.  The day before he died, he had spent hosting a mother’s day celebration for his family, his parents living a scant half-hour from his lakeside cabin.  It has been a mystery to many people why I stopped dating him, and before this time, I don’t think I’d tried to find the words.  It feels important, now. 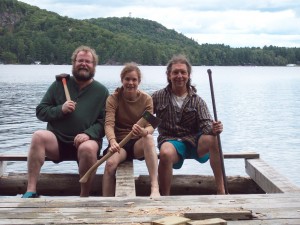 I have lived with chronic health problems all of my life. They flare with cognitive losses, emotional turmoil, and physical pain when I don’t live an extremely regimented and healthy life.  At the time I met Michael, I didn’t have a name for my challenges, and had been taught from an early age to hide the symptoms as best I could — no-one likes a complainer, and things like rocking, droning, constant chewing, and meltdowns made other people criticize my whole family, never mind treat me badly.

While determined public cheerfulness was a conscious lifestyle choice for me, humour was not a big part of my life before spending two months prospecting with Michael and a crew of other geology types. But Mike could take any difficult situation and turn it on its head until you were laughing while you lived through it, and I loved that about him from the first.

Some man at the mine site would begin to stalk me and ask gross questions of my new geologist co-workers. Mike would head him off, joke with him about the size of the knife I slept with, and cap off the story with a laughing remark that to the prospecting crew, I was like a sister: if anyone hurt me, they’d have to break his legs. Over and over, there was thoughtful, proactive, and effective action taken in a way that didn’t sting.

At the end of the summer of ’88, when we’d been working together two months and it was time for me to return to university, I gave him a kiss and asked if we could stay in touch. He was a little shocked, as it was his first kiss at age 30, something that told my 23-year-old self to be extremely careful of this dear man. To my delight, he took me up on it, and we began dating. At first, he didn’t visit me at university every weekend, and sadly, things went better that way.

Mike would show up with some kind of processed and sugary treats, and I would ask him not to bring them. Then I would beg him not to bring them. You see, for him it was a win if he could find something I couldn’t resist, and he repeatedly did. When he found these things, he would buy them in quantity for me, and try to leave them with me. I usually managed to send the remains home with him.

He would be there for the sugar high, the beginnings of the gluten and casein opiate stupour, and the very tip of the emotional upheavals and thinking losses from hormone and neuro-disruptive food chemicals. Then he would go home while I carefully and strictly supported myself through cravings, hangover, and withdrawal symptoms… while trying to keep up with my coursework. The words, “it’s not good for me” and “it hurts me” had no meaning, for Mike.

Despite this, we had wonderful times together.  All would have continued well with the two of us, if I hadn’t needed some leg operations. The first recuperation I did with my parents, difficult as I had never fit well in the first place. Mike and his sister offered to help me through the second surgery, and I lived in their home. The deluge of treats was constant. My immune system wasn’t dealing well with it, my thinking and memory were dropping, I was fighting horrible emotional turmoil, and worst of all, my leg wasn’t healing properly.

I tried and tried to tell him not to bring me treats, not to put an opened bag in front of me. And then I had a horrible realization. Mike would never stop, and if I didn’t stop seeing him, it would kill me a lot faster than it did him. And I didn’t have the willpower to refuse the treats and stay with him.

We stayed in touch, and as he had different health crises over time, I would offer support — after all, my whole life made it ever-so-clear what the good or not-so-good choices were, immediately. I almost got him in to see a Naturopathic Doctor, fifteen years ago. He got to the point where he would eat the meals I cooked and say, “That was really nice” or “That was delicious” in a surprised way, but for Mike it was never really good unless it was “bad for you”.

I started calling this the Buckley’s principle: If it’s bad for you, it tastes better. Ten years ago, we found a way to exercise that he really enjoyed, and ended up doing a swing-dancing demonstration at the River Run Centre in Guelph. But when I met my husband-to-be, Bill, the heart for dancing went out of Michael.

I never knew Mike had an addiction to milk until one of his sisters mentioned it at the wake; he would probably have hidden it while he was around me. If, as I now suspect, Mike also had a leaky gut, he would have had the same pain relief and other opiate responses and cravings that I did when the insufficiently broken-down casomorphin (from dairy), and gluteomorphin (from gluten in grains) took a short-cut into his bloodstream. When one of his sisters spoke at the wake about regular gorging with Michael on their weekends together, I couldn’t say anything. She had the willpower to stop; Michael never did.

As an autistic adult in a fast-food culture, I’m like a throwback to our great-grandparent’s time; everything has to be scratch-cooked from fresh, local, chemical-free ingredients. I first realized the benefits this would bring me at age 11, and had done a lot of trial and error before I ever met Mike — trial and error that wasn’t sanctioned or supported by my family, my culture, and even most of my friends. Over time, there has been more interest, and for the last 15 years I’ve been teaching hyper-nourishment skills for health recovery.

After his first heart attack, Michael heard from many and various people that he needed to make healthier lifestyle choices. But ‘healthier’ in our culture’s idea was a long stretch away from the foods which actually restore health, and the activities that actually bring joy. And no one can say that organic scratch-cooking is easier, or even cheaper, than prepared and processed foods. Not only is there very little support for making healthy choices; family and culture will try to undermine you for what they perceive as needless effort — or an unvoiced criticism of the different choices they make.

I will never stop loving Michael, and I will miss him so much. I will always regret that I couldn’t communicate to him, when we first started dating, that his choices were killing me. At that time, I had neither the research to support me, nor the words that he could hear. After that time, my distance reduced my impact in his life.  His choices killed him far too young.